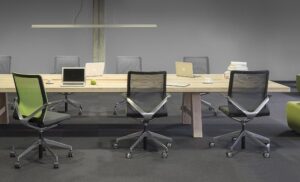 With the advent of billions of devices and the Internet of Things, we have an increasing need for a transparent, verifiable and future-proof system to exchange and store data. A scalable system with trust in parties based on algorithms. Automated trust. And also distributed, so that a single point of failure is excluded. We all hear about the blockchain. But how does that work in practice?

Some office chair suppliers have equipped their product with sensors to obtain data. Data about the state of the chair, where it is located, how often and how it is used. Relevant information to be stored and analyzed. Traditionally this is done in a central system, controlled by the supplier, whether or not in the cloud. The added value for the customer is minimal and it also increases costs. How else would that be possible?

By using a distributed system (blockchain) instead of a central system, the paradigm changes. It prevents the data from interfering with data from other systems. In addition, the blockchain solution is set up under the responsibility of several parties, for example, the customer (user) and the supplier. So then it is not a one-way street, but it really becomes’ cooperation’. Because let us be honest, who is the data? Why should the customer trust the supplier or a third party?

There is no trusted third party at the blockchain. No one is the boss, but actually, everyone is the boss. The blockchain technology is fraud-proof. This is particularly important when IoT sensors have to deliver reliable data to different parties. Systems trust each other instead of business partners. And, as I said, the problem of’ single point of failure’ has been solved. No one owns the system and no one is able to cheat or eliminate the system. Attacks from outside of his past time. The ultimate form of controlled collaboration.

But there is more possible with this technology. Suppose that the supplier wants to supply the chair for nothing or at a reduced price and wants to make money from the use of the chair. In that case he does not deliver a single product anymore, but he delivers a service:’ sitting’. The customer only pays for the use of the seat. Then it is nice that there are IoT sensors in the chair that can record this usage permanently and reliably. And this in a transparent, verifiable and immutable system. The blockchain.

It seems too good to be true. But it is the daily reality. Blockchain technology is already being tested extensively and there are already various use cases. For example, the automotive industry is busy offering various options in (lease) cars that can be turned on and paid for with blockchain technology’ according to consumption’. I firmly believe that companies and organizations dedicated to these changes will perform better. Just because they will be better able to meet the future demand of the customer. Working together on new business models with the latest technological possibilities. There are currently many parties that find each other in the blockchain. Set up jointly distributed systems without using its own infrastructure (the same infrastructure, which has often made cooperation so difficult in the past).

In the port of Rotterdam, customs, Maersk, the municipality of Rotterdam and various port companies are currently working together on a joint blockchain. IoT technology is applied and parties have drastically reduced costs and the integrity of the data is indisputably established. Beautiful projects that will be the coming years.

At DecenterX we are very enthusiastic about all the possibilities that the blockchain offers. We are not called “The Blockchain Company” for nothing. And we have been for a number of years.
Facebook-f Linkedin Twitter Youtube

Sign up for our newsletter to get update information, project and insight.
Copyright © 2022 , All Rights Reserved.