Posted at 07:41h in Webblog by beheerder
0 Likes

Why can you send an email to someone for free, but do you need an intermediary to transfer money, plus a few days of patience and transaction fees? With the advent of blockchain technology, this question seems to become superfluous. This development is really going to change the world. I expect even more than the arrival of the Internet at the time,’ says Erwin Giesbers of DecenterX.

Unlike the Internet, blockchain technology also allows value to be transferred directly. With an e-mail, you keep a copy of what you send. With blockchain it’s different; if you transfer an amount, it’s immediately gone and is also directly on the recipient’s account,’ explains Giesbers. He foresaw the radical development already in 2013 and founded as director of Compello Trustbrix to make a safe and decentralized application. With his company, he became the main sponsor of PEC Zwolle, which performed extremely well in that period. We were one of the first, but we went too far before the music’, realizes Giesbers. In itself not wrong, but we want to hear the band and that was not the case. If there are more questions than answers, you’re too early.

Giesbers did not give up and so he has been developing concrete blockchain applications with DecenterX for eighteen months. Some fifteen people have already been involved in this. 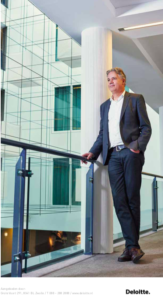 Blockchain is based on Bitcoin technology and was created in 2008 during the banking crisis. Satoshi Nakamoto came up with a system to transfer value via the internet. A common cash book was created and updated at any time. Giesbers: ‘Without the bitcoin there would have been no blockchain. There are now thousands of applications besides the bitcoin. The core of blockchain is that your trust will be automated. You don’t need a third party anymore. Moreover, the blockchain is safe. The data is stored decentrally, not on one computer but on many computers. This way, the system cannot be hacked. And the most important innovation of the block chain are the smart contracts: immutable agreements made in computer code and recorded in the block chain.
Banks, insurers and notaries will have a completely different role in the future with the arrival of blockchain. Giesbers: ‘The bank is still in the centre of money circulation. With the advent of digital money, people can transfer money worldwide, almost free of charge, within seconds. The block chain then forms the transport system. Banks will be involved in monitoring users and money flows. They now invest almost half a billion in blockchain. The biggest challenge is that the regulations are lagging behind. We are now working hard on the legal frameworks.

In May this year the Blockchain Valley Foundation, with DecenterX and Deloitte, organised the Blockchain Valley 2018 congress where 450 visitors were informed. During this congress we showed possible and existing applications with blockchain technology in various sectors, such as healthcare, education, government and financial services. Deltion College, for example, looked at what we can do about the fake diplomas that anyone can order easily and for little money via the Internet. By irrefutably and forever registering the diplomas in the blockchain, a future employer can be confident that the applicant is the rightful owner of the diploma. A green check mark in a mobile app or on LinkedIn is the digital hallmark so that the paper diploma becomes superfluous. A great opportunity for the Zwolle region’, according to Giesbers.
This is how blockchain changes business models’, he continues. Take a supplier of office chairs who uses Internet of Things (IoT) to incorporate a sensor in his chair. He sells the chairs at a lower price and every movement of the chair is processed and settled in the block chain. Or an airline that shows you on arrival at an airport on an app whether your suitcase is there. If not, a hundred euros will be transferred to you immediately to buy the basic necessities of life. Human interaction with a claims department is no longer necessary. The working method is therefore more efficient and as an airline you retain satisfied customers.

Customers can turn to DecenterX for the development of blockchain applications: from idea to realization. After knowledge- and inspiration sessions, we use a digital moodboard to create a usable application’, explains Giesbers. Blockchain does not start with IT. Together with management, we look for efficiency benefits or new business models. Then we make a proof of concept. Then the customer can decide whether or not to take it into production. Blockchain is not a threat, because it is built next to existing systems. But it can be linked to existing systems’. Giesbers is convinced that companies that are currently too hesitant will suffer as a result. I advise every company: start thinking about it, get informed. If necessary, take it up with other companies’. 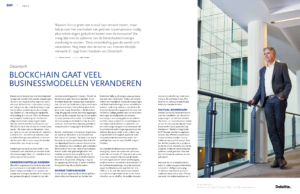